The main street in 1:4 scale

Feel like a giant in the small Storgata - a copy of Storgata in Lillehammer in 1940.

Lilleputthammer Familiepark is a miniature version of Storgata in Lillehammer in the 1930s, built on a scale of 1: 4. For adults, Lilleputthammer Family Park provides a historical look back to the 1930s with the shops, hotels and cafés of the time. For the children, it's great to feel like a giant in the small town, and look in the windows. It is also possible to enter many of the houses.

Join a city walk in Lilleputthammer

Below we have described some of the history behind the various buildings in Lillehammer. Lillehammer belongs to the so-called "landscaped cities". On August 7, 1827, the foundations of the city were approved by the government, but the demarcation of plots did not begin until 1828. Road Inspector C. Buchholz`s plan and building regulations were adopted by a royal resolution on July 7, 1828. The building regulations provided rules for the buildings, for the width of the streets and the houses in relation to the street line. There are provisions here that the corner buildings should have broken corners at least 5 cubits wide. The result of the provision is still easily visible in Lillehammer.

The building tradition in Lillehammer testifies to sobriety and little extravagance. But if you first start looking, you will still find many fun and interesting building historical expressions both in wholes and details. 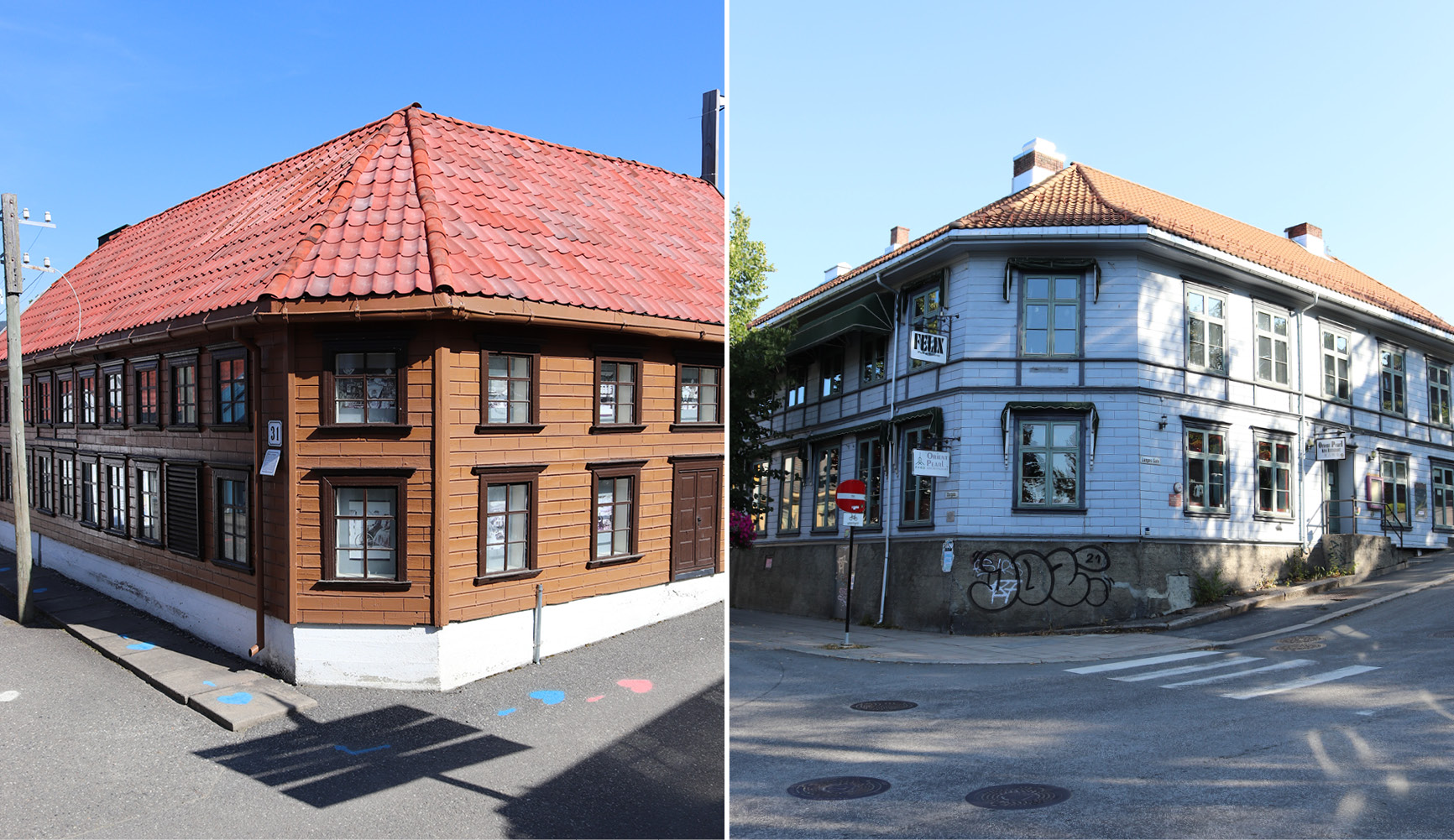 Storgata 31 – Wiesegården
The building dates from Lillehammer's oldest period, and was built in the Empire style by merchant Ludvig Wiese. Half of the ground floor was a business premises, and on the second floor there was a large hall where Wiese held a large Christmas ball with up to a couple of hundred guests from Lillehammer and the surrounding villages. 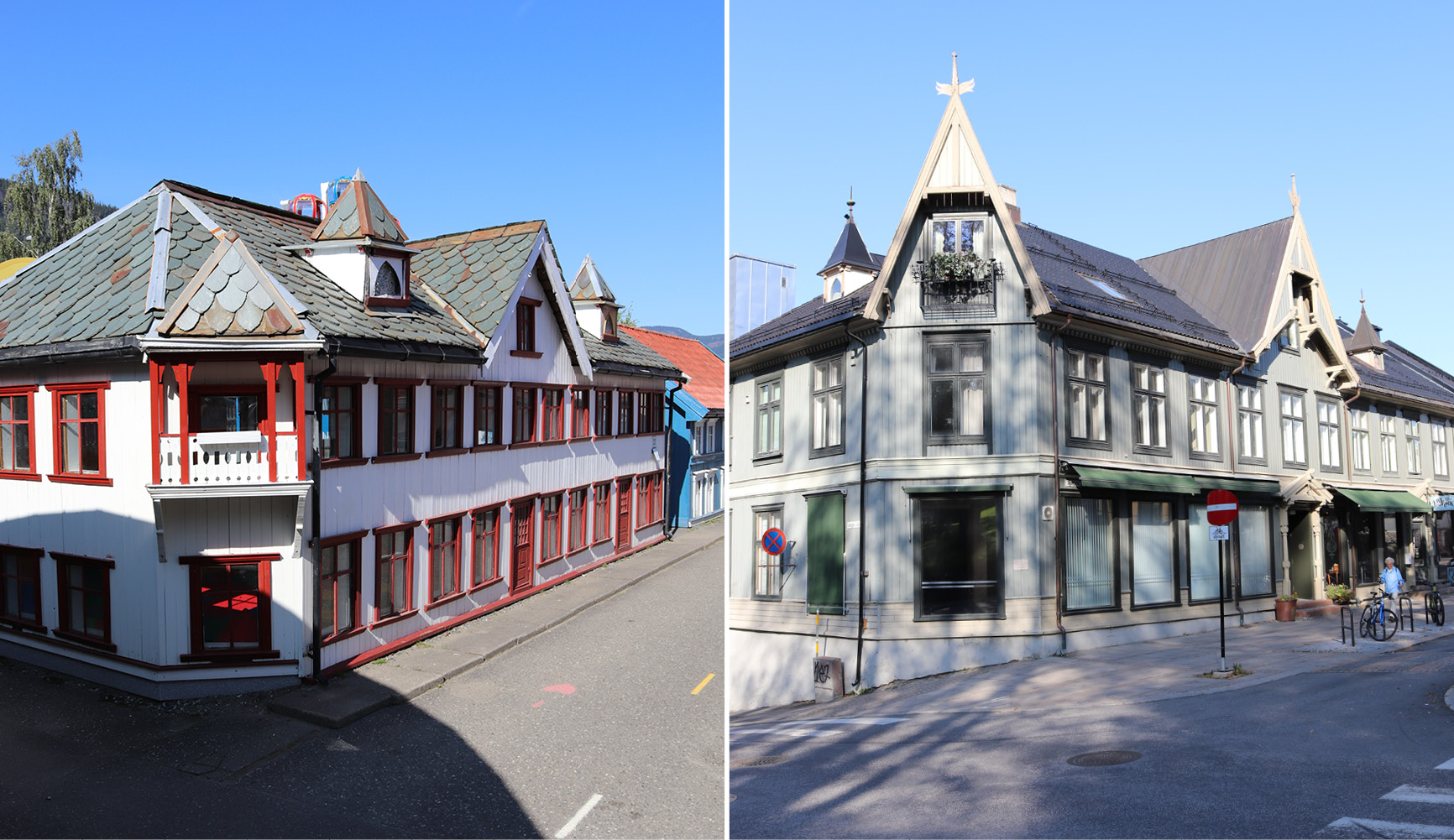 Storgata 32 – Astrupgården
The building is a two-storey half-timbered house, and built with a standing panel in distinct urban Gothic style with elements of dragon style. The building is a good example of the typical and magnificent building customs of the last half of the last century. 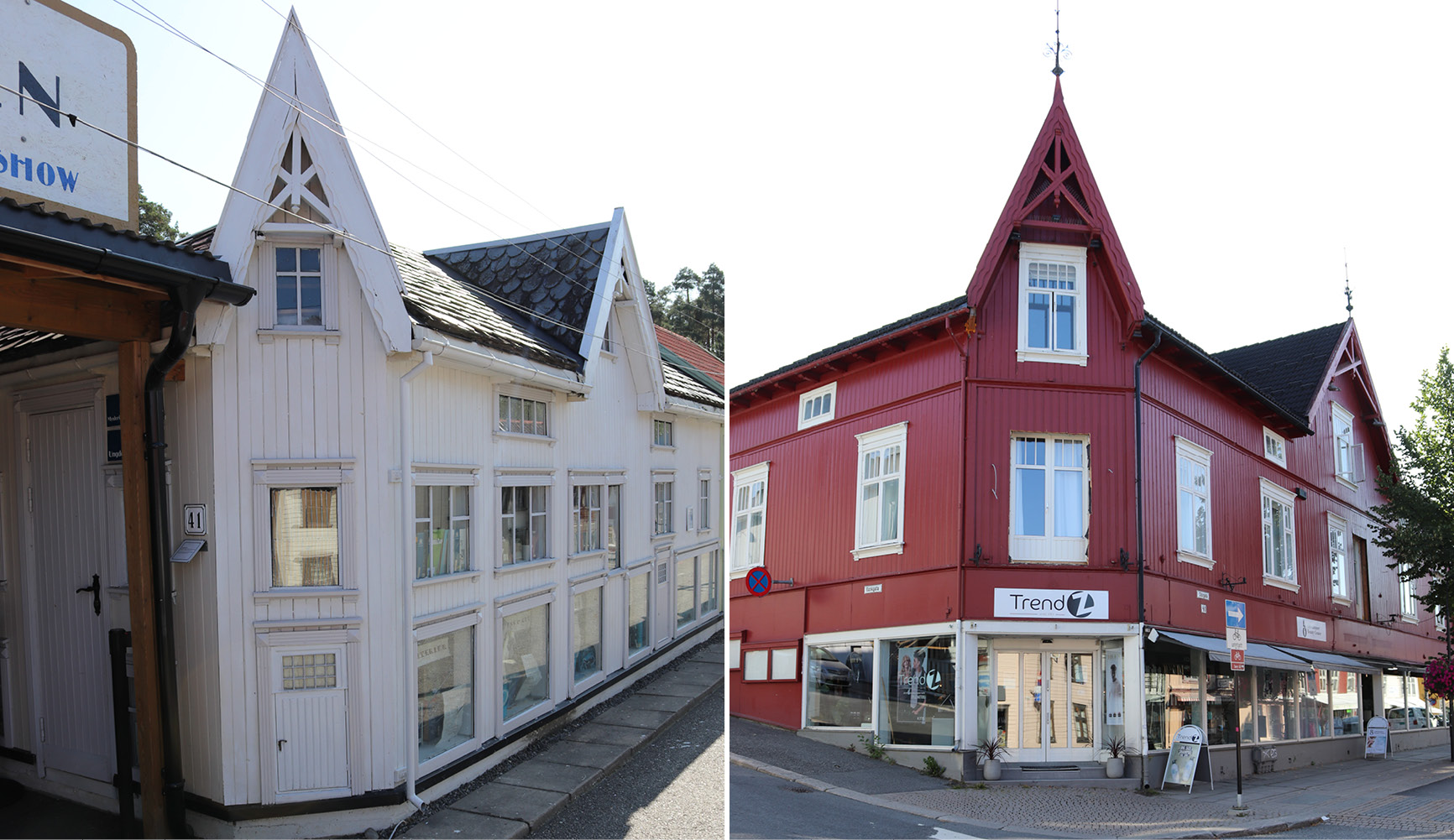 Storgata 41
The building is built in Swiss style, and was built by merchant Rolf Bjørke around 1900. 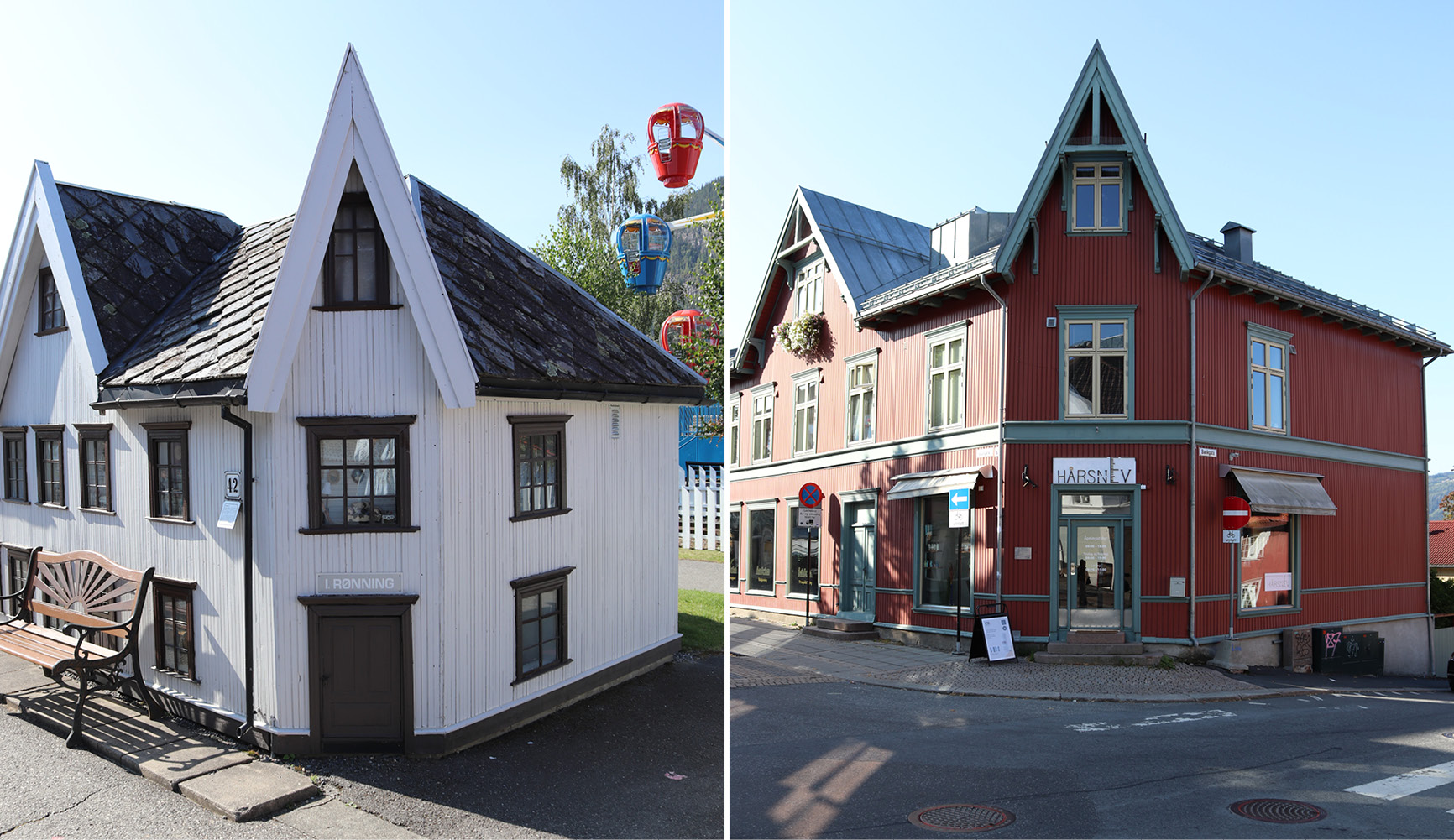 Storgata 42
Built in Swiss style. On the corner there has been a shop for over 100 years. At the beginning of the 20th century, Netta Olsen traded white goods here. Later, the business was taken over by Helene Forberg, and in 1921 Ivar Rønnings Manufaktur opened. 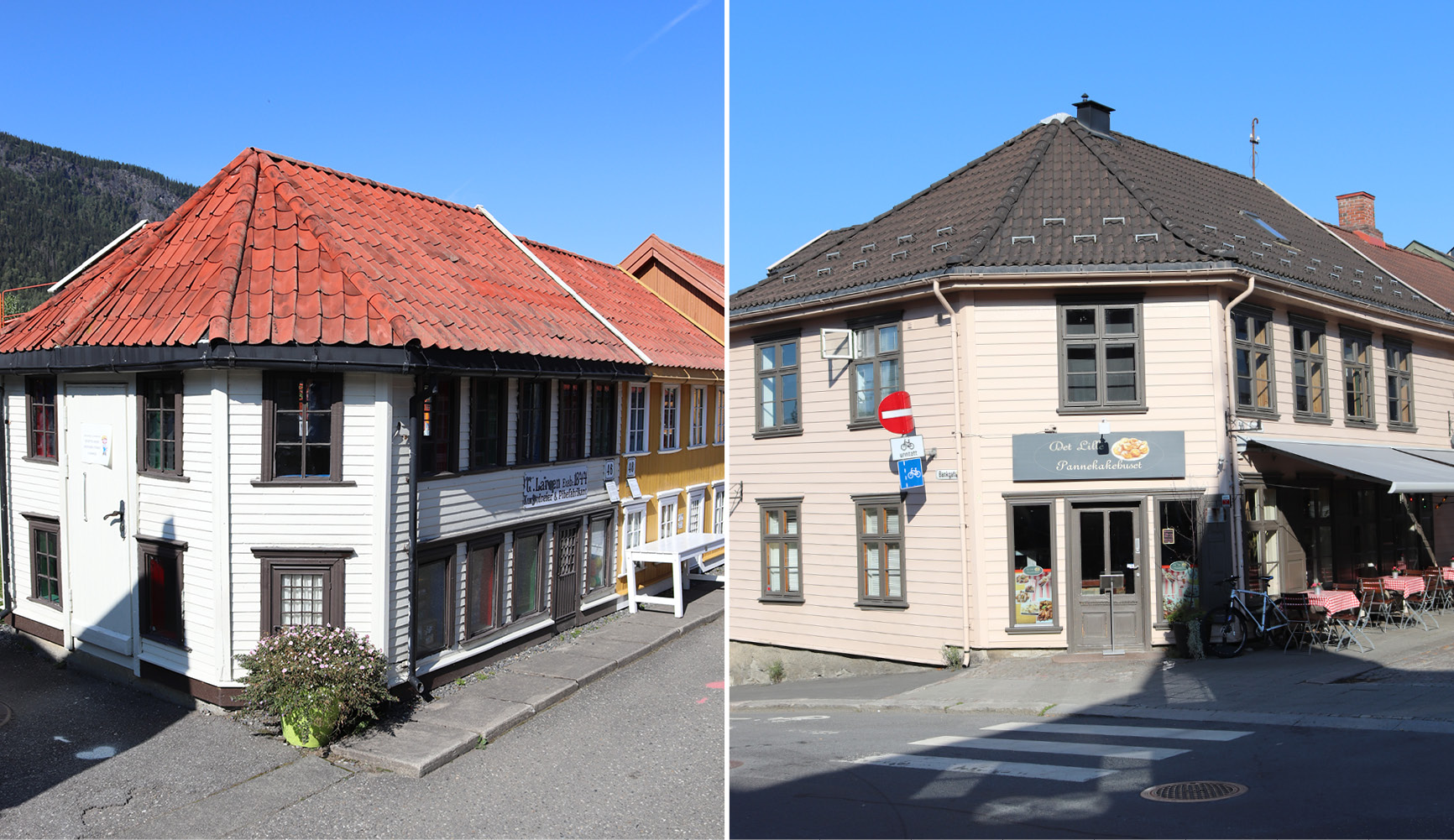 Storgata 46 – Raabe-gården
Named after gardener Raabe, who had flowers and a vegetable shop here for a number of years. The well-known art turner and pipe manufacturer Gudbrand Larsen established himself in the building in 1844. 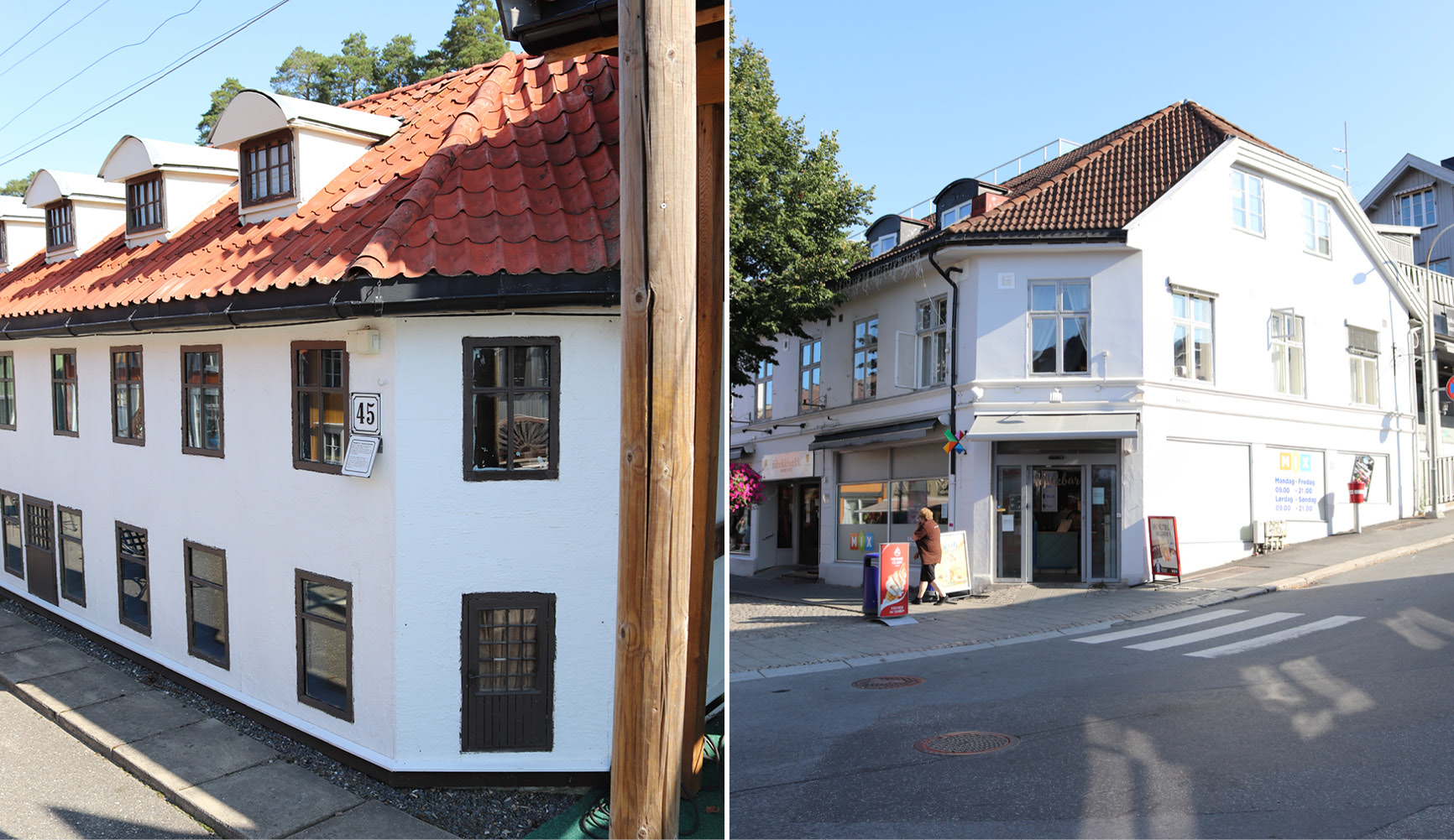 Storgata 45
Is a timber building interspersed with brick and plastered, built in the 1850s. It was often called Baumannsgården after district doctor Ludvig Adolf Baumann who was a doctor in Lillehammer from 1858-78. On the ground floor was the Promenadekafe. 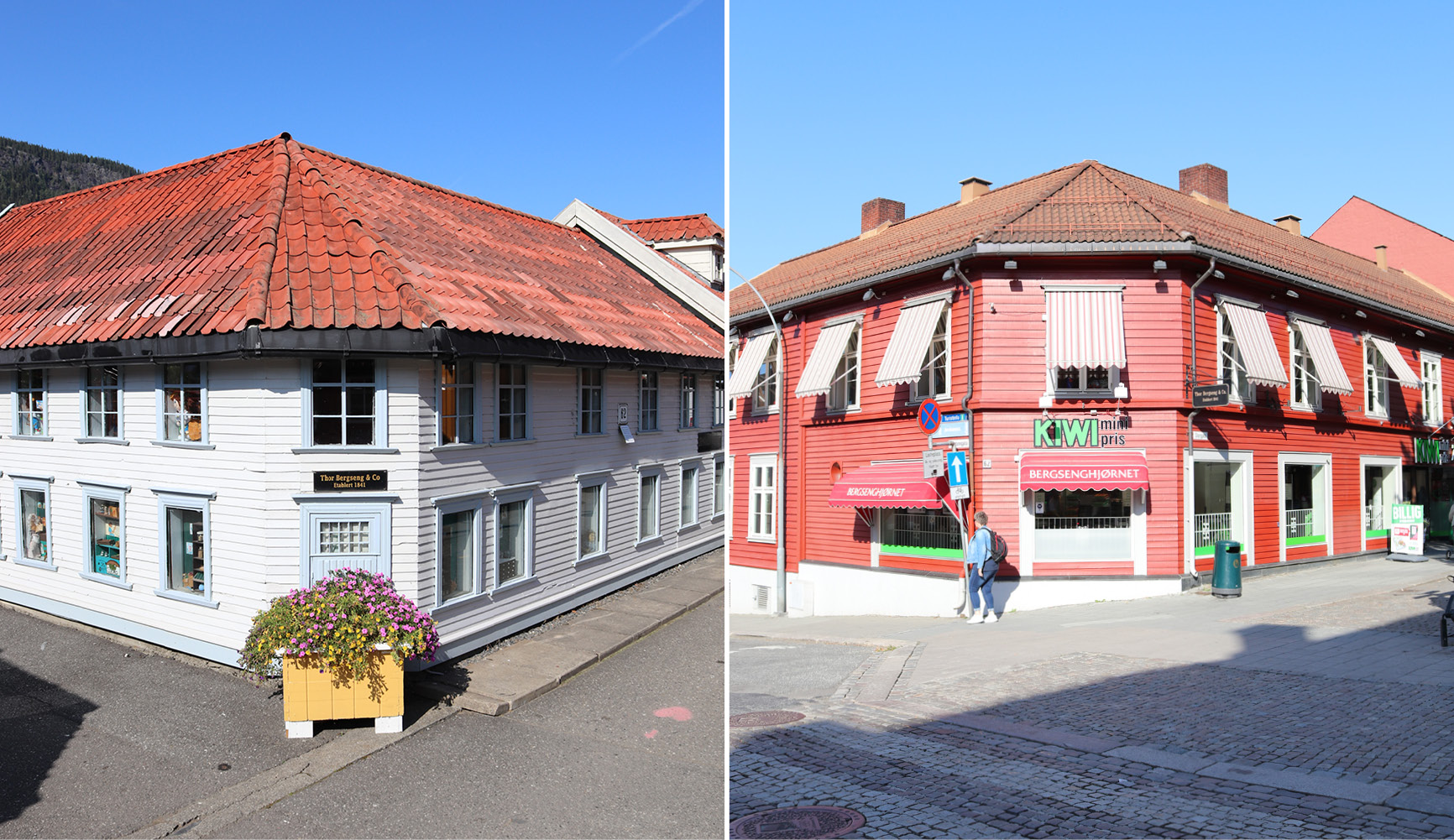 Storgata 62 – Bergsenghjørnet
Thor Bergseng & Co is a two-storey empire building with horizontal panels and a swayed roof. The business was started in 1841 by Arne Bergseng. He ran a regular trade, and the business is still owned by the same family. 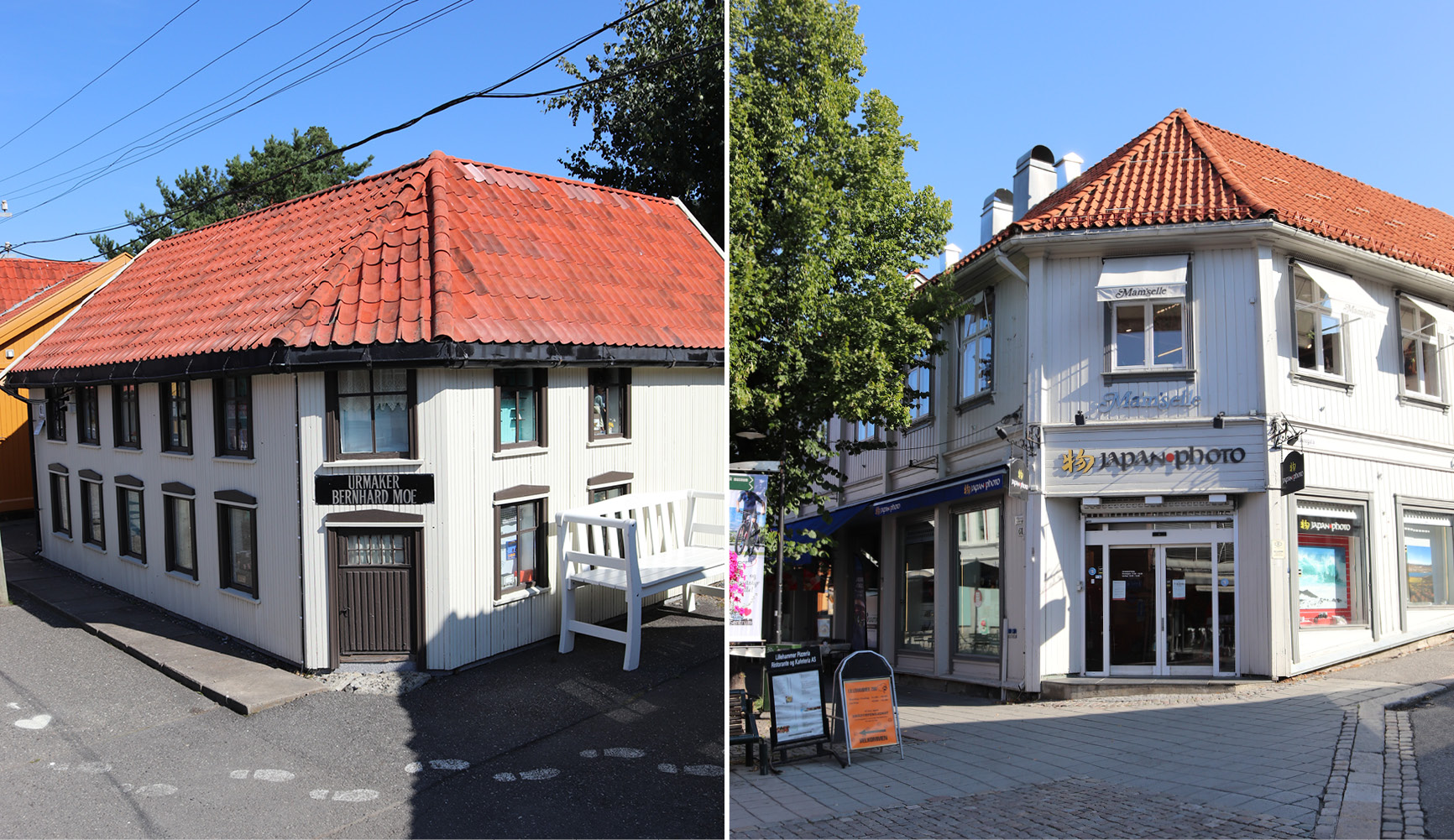 Storgata 61 – Olstadgården
Was a well-known business in Lillehammer before. From 1842 A. G. Olstad ran a considerable business here 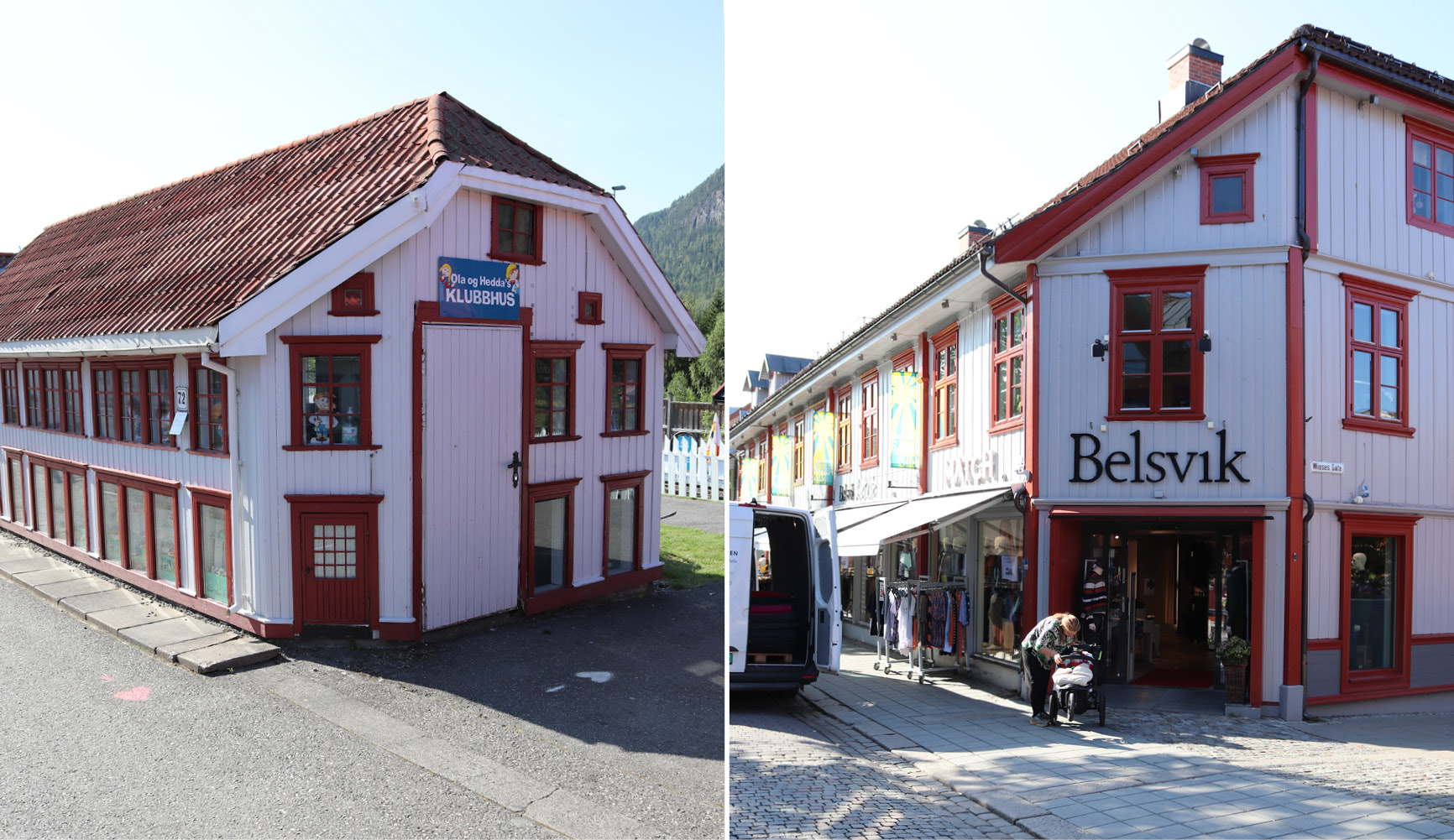 Storgata 72
Merchant Chr. Andersen ran a successful business here. In the backyard he had a tobacco spinning mill, a box factory and a label printing house. 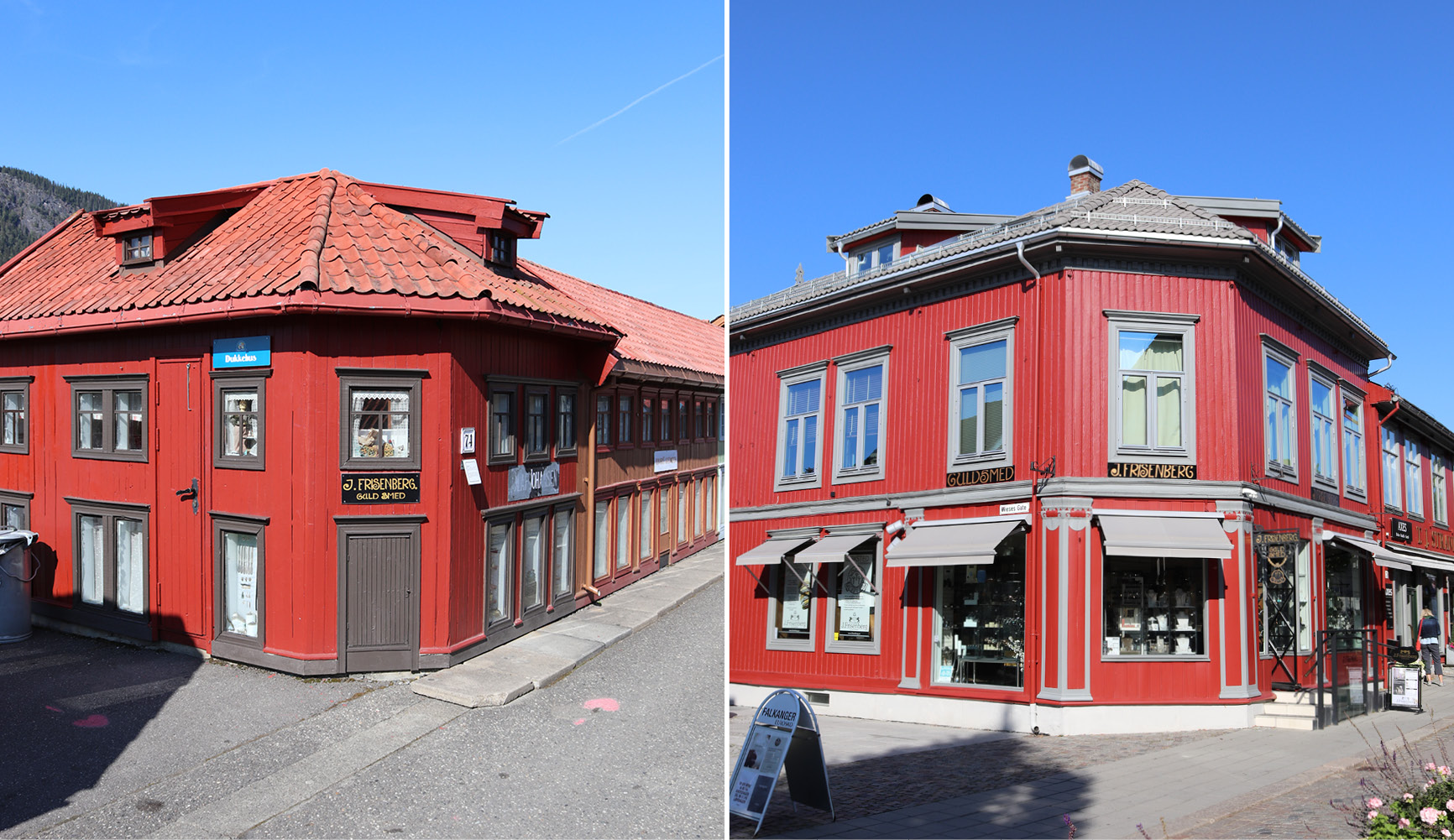 Storgata 74
Gullsmed J. Frisenberg is one of the city's oldest craft businesses that is still in operation. The building has many elements from neoclassicism. 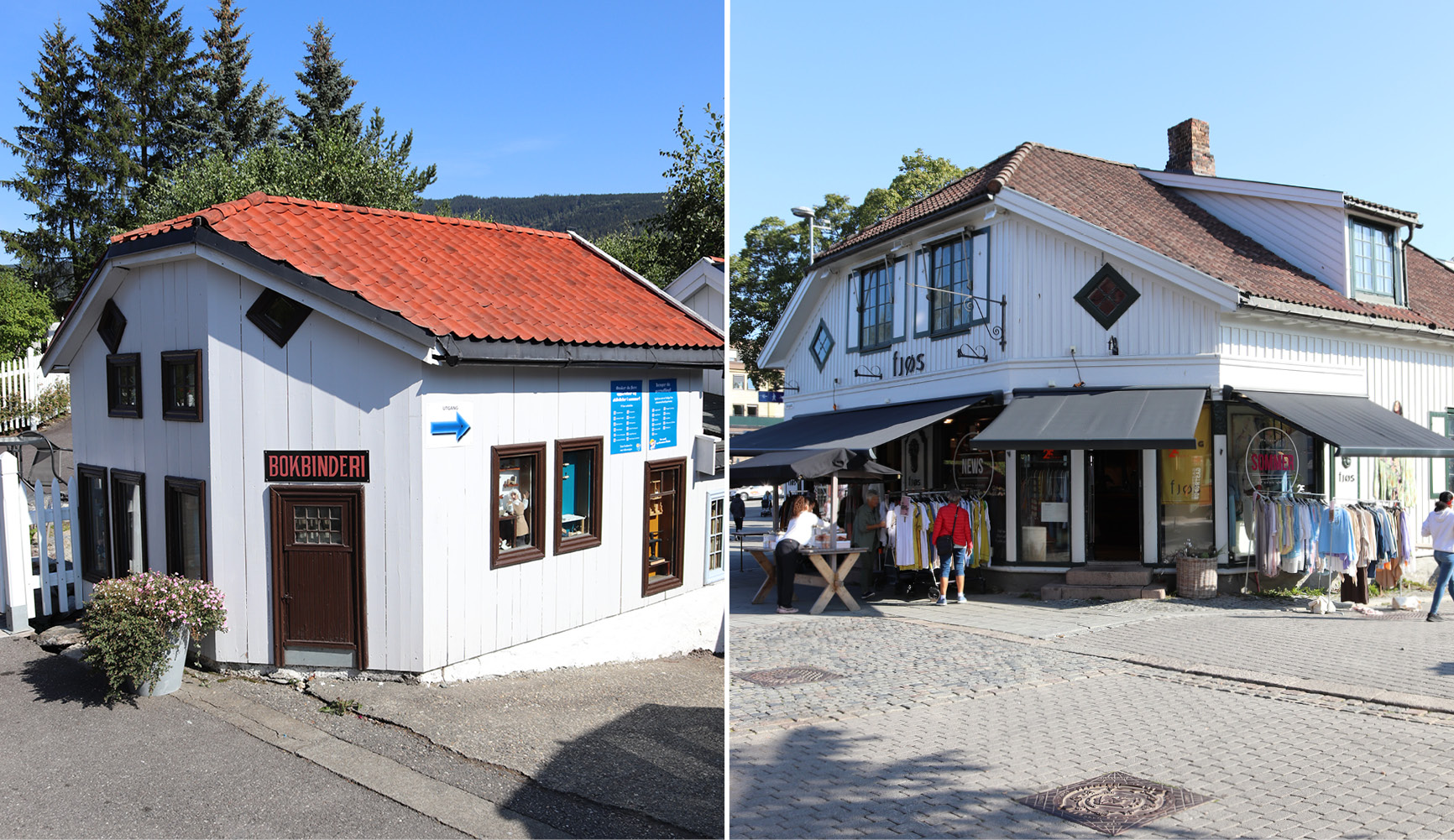 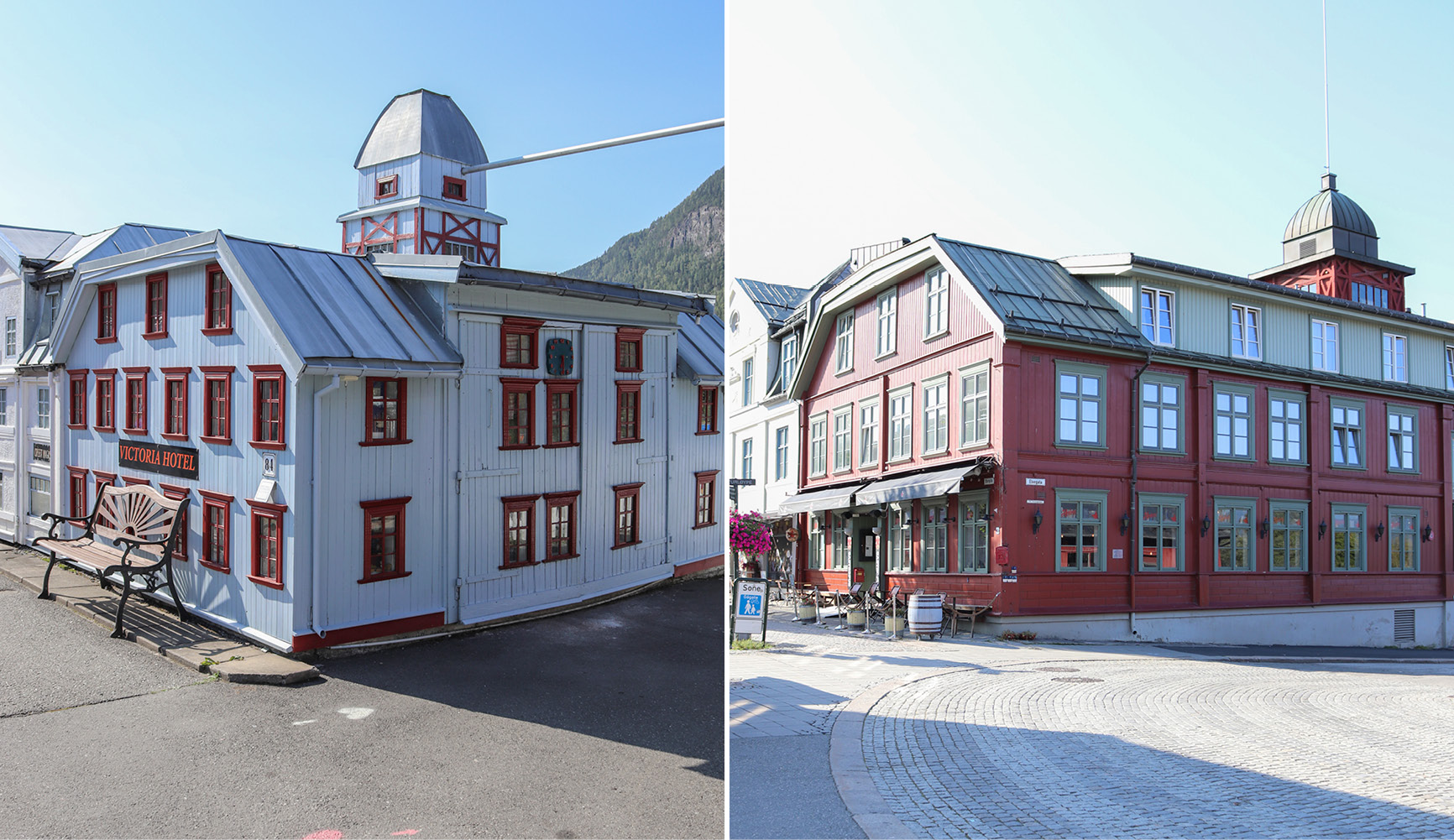 Storgata 84 – Victoria Hotel
Can trace its history back to the 1870s. The hotel was built by Knut Morterud, and consists of two buildings that were joined together with equal ceilings and flat roofs at the turn of the century. The flat roof was an attraction for tourists, and here many artists enjoyed life. The hotel has also had several royal overnight guests; King Haakon and Queen Maud in 1906 and King Olav in 1958.

Source: The hiking book for Fåberg and Lillehammer, new and revised edition 1991 by Fåberg Historielag 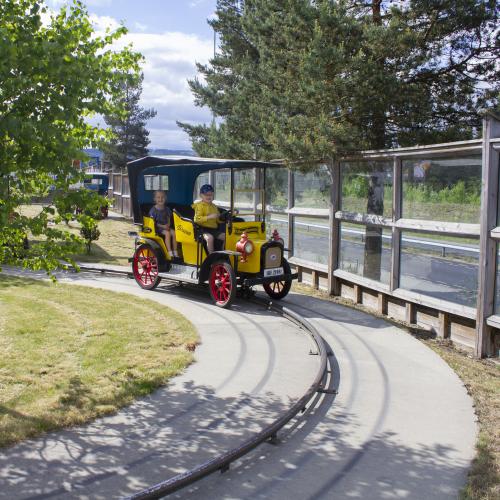 Ready for a ride in "old-school" style? The great-grandfather cars are styl...